The Daughters of presentation of Mary in the Temple, stepped in Flores island, which is one of the Islands in the collection of Islands called ‘Indonesia’ , a country in Southeast Asia and Australasia/Oceania. It is part of the Malay Islands. It has 18,108 islands. People live on about 6,000 of these islands. The capital of Indonesia is Jakarta, on Java. It is the fifth most populated country in the world with 238,452,952 people. The official language of Indonesia is Bahasa Indonesia, but a total of 737 languages are spoken in different parts of the country. Flores belongs to the province Nusa Tenggara whose capital Kupang, is on West Timor. Even the flowery name "Capo of the Flowers" suggests it, not more flowers grow here than in other parts of Indonesia. However, the landscape of Flores is very green, filled with hills and valleys as if one would feel one is in some part of Kerala, or more precisely in wynad. Papua New Guinea, Malaysia, and East Timor share land borders with Indonesia. Other nearby countries are Australia to the south, Singapore to the Northwest, and Philippines to the Northeast.

Ruteng is a small town in the highlands towards the western 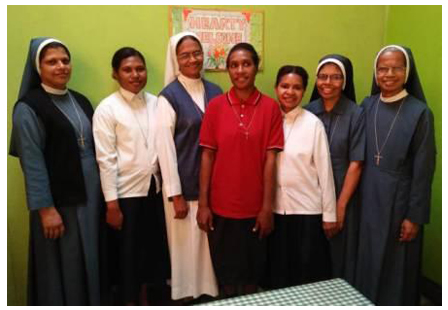 end of Flores Island. It is the capital of Manggarai Regency, serviced by the Frans Sales Lega Airport or Ruteng Airport. The population is predominantly Roman Catholic, but still preserve the ancient Manggarai custom of caci (whip fighting), which is usually practiced at weddings, and serves as a tourist attraction.  The Daughters of Presentation of Mary came to Santu Klaus which is in Ruteng District in the year 2018. The formation of the candidates Rita and Patrin from the neighboring country of Papua New Guinea paved way for this new venture. The community is actively engaged in the pastoral activities, house visits, along with their commitment to learn the local language. The country depends on agriculture for its sustenance and people are very simple and very welcoming.

Timor is a large island in Southeast Asia divided between the country of East Timor (Timor-Leste) and the Indonesian region of West Timor. It can also refer to: "Timor" (song), a protest song about East Timor. The island is divided between the sovereign states of East Timor (Timor-Leste) on the eastern part and Indonesia on the western part. The Indonesian part, also known as West Timor, constitutes part of the province of East Nusa Tenggara. Kupang is the capital of West Timor, the Indonesian portion of the island of Timor. It is also the capital of East Nusa Tenggara, a province which also includes Flores and Sumba. Kupang is an important transport hub too.

The Daughters of Presentation opened another branch in West Timor in April 2019 in a place called `Bello’ in Kupang. Bello is situated about 4 kms from Kupang airport. The community is inserted in the substation of St. Augustine, which is under St. Franscis Parish, Betula. The sisters join all the activities in the parish, and getting to know the life of the people rendering their whole hearted service in the locality. Tuition classes for English learning is conducted an the children are learning enthusiastically. Every Sunday, a number of children come to us to play and we too join them. Sure, it gives life and happiness to them and to us too.


Deprecated: Non-static method modFlexiCustomCode::parsePHPviaFile() should not be called statically in /web/htdocs/www.casapresentazioneroma.it/home/modules/mod_flexi_customcode/tmpl/default.php on line 55